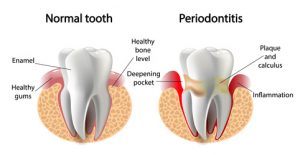 It is believed that the bacteria that causes periodontal disease may cause small blood clots to form that can contribute to clogged arteries and build up of fatty deposits within the heart arteries.

Signs and symptoms of periodontal disease:

* We are open one Saturday a month.

We are excited to tell you that we are open once again and welcome you back! We have always prided ourselves in providing a safe and clean environment, but in light of the COVID-19 Pandemic we have instituted additional guidelines and protocols to ensure your safety.